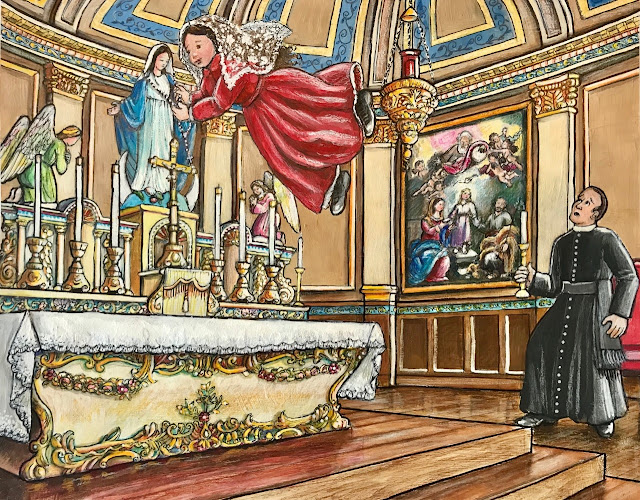 Did you know that Canada once had a stigmatist in its midst?
On July 11, 1833, Aurelie Caouette was born in Saint-Hyacinthe, Quebec. She was a devout girl, and by the age of six her parents saw her floating in prayer towards Jesus in the tabernacle. Alarmed, they consulted their parish priest. The priest remained calm, noting that young Aurelie was a normal child, of good humour, and very pious. In fact, he even permitted Aurelie to receive first Communion early, at the age of nine (the standard age was thirteen then).
In 1852 Aurelie received the stigmata. It was mostly hidden, though at various times of the year blood would gush visibly from her head, side, and hands. Later in 1852 Aurelie vowed a life of virginity, and took on the name Catherine. Historian Charles Coloumbe states that she did so in honour of St. Catherine of Sienna, who also suffered the pain of the stigmata (p. 127). However, her biography states that it was actually in honour of the martyr St. Catherine of Alexandria. Either way, Catherine-Aurelie persevered in prayer and eventually, with the encouragement of Montreal's holy Bishop Ignace of Bourget, founded the Sisters of the Precious Blood on September 14, 1861. This was just 12 years after Blessed Pope Pius IX instituted universally the Feast of the Precious Blood.
Devotion to the Precious Blood via Catherine-Aurelie's Order grew quickly. When Catherine-Aurelie died in 1905, there were many houses of the Order in three different countries. And devotion continued to spread after her death as well. The height of devotion to the Precious Blood perhaps came under Blessed John XXIII. In 1960 he approved the Litany of the Precious Blood, made the Feast of the Precious Blood a first class Feast (July is the month dedicated to the Precious Blood), and he also inserted the line "Blessed be His Most Precious Blood" into the Divine Praises.
In the early 1960s there were 26 houses of the Order, including houses in Hamilton (where they make hosts), Edmonton, and even Regina. However, what can be said other than that Pope Paul VI happened. Amidst the ravishing of the Church's great liturgical feasts and customs, in 1969 Paul VI suppressed the Feast of the Most Precious Blood, stating that Corpus Christi was enough for the Church. Catherine-Aurelie's Order immediately felt the brunt of this decision, and many of the houses have since been shut down.
Our Canadian stigmatist was declared venerable on December 1, 2016. 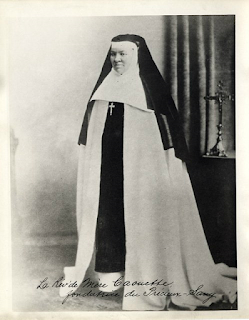