The "Legacy" of Biden's Bishops 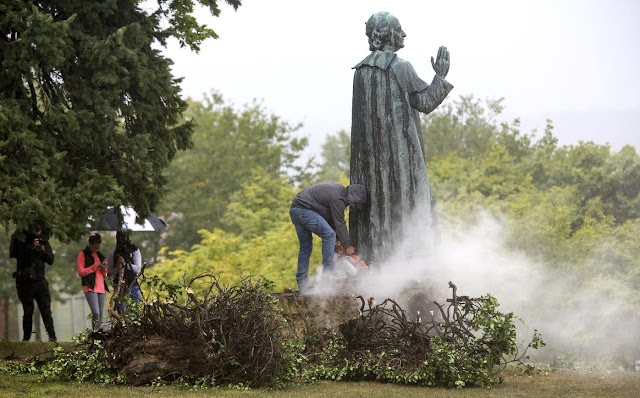 I am thinking about a famous scene in the life of St. Jean-Marie Vianney. He is twenty, and attempting to study for the priesthood. “Attempting” is perhaps too kind of a word. It is an utter debacle. As the language of Latin killed the Romans - the saying goes - it is now killing him. In this scene Jean-Marie is being reprimanded by a much younger Mathias Loras, a bright but excitable student of only twelve. Though himself excitable, Jean-Marie does what only a saint would do, and kneels down before the young boy and asks for forgiveness. Mathias bursts into tears at the sight of Jean-Marie’s humility, and throws himself into the arms of our good saint. At that moment a friendship begins.

We know the future of Jean-Marie, later titled the Curé of Ars. But what of young Mathias Loras? According to Abbé Francis Trochu’s biography, The Curé of Ars, Mathias went on to become a missionary in the United States, and was even made the first bishop of Dubuque, Iowa (p.40). It is said that this bishop had a reputation for sanctity and, at least during the 1920s, there were indications that his cause for canonization would soon be introduced. What a heartwarming story for our unhinged times.

That is, until reality gets in the way.

I decided to read more about Mathias Loras. Curiosity shows no mercy. Last year it was revealed that in 1836 this bishop purchased a slave woman, and for sixteen years hired her labor out in order to fund his own diocesan enterprises. As only the year 2020 could, the revelations brought on a firestorm of ire, and led to the removal of Loras’ statue from the grounds of Loras College on September 8th, 2020. I will make the bold prediction and say that Mathias Loras will not be canonized any time soon.

What was someone like Loras thinking? I mean that honestly. I suppose someone might reason, “Oh, but owning slaves was common then, and Loras, though mistaken, was simply trying to aid his diocese.” Poppycock. For a Christian to literally buy in to the slave trade is easy to recognize as deplorable. In many ways, it is akin to a current controversy in the Catholic Church...

It is a this point I must make the jump from Loras and slavery to many of our current bishops regarding abortion. I speak in particular about the United States Conference of Catholic Bishops, and their inability to meet to discuss Joe Biden.

Biden is a man who repeatedly boasts of being a good Catholic, all the while championing the murder of innocent babies (as well as other nefarious ideologies). In short, Joe Biden is deadly. Just ask the unborn children of America. And yet, a substantial list of bishops and cardinals - 68 to be precise - refuse to even meet to discuss whether or not to ban Biden from Holy Communion.

The same question must be asked: What are these bishops thinking?

If Loras’ sins of slave trading were obvious, that the bishops should kick Biden out of the Catholic Church is like declaring water wet. The word obvious does not even begin to describe it. We are not asking about the finer points of canon law here. We are asking whether or not a president who pushes abortion should be seen as a Catholic in good standing. What on earth must one do to not be a Catholic in good standing? “Let the little children come to me,” says Our Lord. Such bishops cannot even decide if the little children should live. Biden and the bishops who support him are a scandal to the faithful.

I cannot predict how this dreadful situation plays out short-term, I can only envision the long-term solution. That is, someday I imagine statues of Cardinal Cupich in Chicago, Wilton Gregory in Washington, Timothy Dolan in New York - and on and on - being strapped with ropes. Thousands of Catholics will be on the other end, pulling and praying. Down will these statues fall - a thousand pieces of rubble scattered on a Catholic Church square. And there will be cheers. Not that the cheers will bring a single aborted life back, but the cheers will resound all the same.

The legacy of Mathias Loras never stood a chance. The legacy of the bishops who support Joe Biden will meet a similar fate.