Papolatry: Fix it or we'll fix it for you

- October 09, 2018
Raymond Arroyo's interview last Thursday with Cardinal Gerhard Muller was very interesting. Muller clearly has had enough with the situation in Rome. Here is the video:


A sense of frustration is especially evident in Muller when asked about reports he was commanded (while saying Mass no less) by the Pope to stop investigating Cardinal Cormac Murphy-O'Connor concerning some very disgusting sexual allegations. Muller, who is bound by the papal secret, simply replied that the rules must change, which currently state that only the pope can order an investigation for a bishop or cardinal. In other words, "I can't say anything... but wink wink nudge nudge to your question."

There exists a papolatry in the Church which only now is becoming evident to us slow-in-the-head masses. I think most Catholics, myself included, have been guilty of this. I remember with great (or not so great) fondness my time at Redeemer University College in Hamilton, ON. I made a habit of challenging the protestant professors on questions of authority. They would say some Dutch Reformed teaching, I would reply: "How do you know that's true?" Eventually, after lots of give and take, the professor would either admit they couldn't know with absolute certainty, or they would yell back at me: "Well it's NOT the Magisterium!" Thou dost protest too much. And yes, it IS the Magisterium. I lived the life. I had Pope Benedict at my side, so to speak, and it was great to be Catholic. One honest young high Anglican even told me: "That Benedict of yours... he's got me very very close to becoming Catholic."

The problem, as we see now, is the sense of papolatry which developed, and even blinded, Catholics such as me. Not that it is at all wrong to rely on the Pope for clarity in faith and morals, that's sort of the whole entire point, but rather the idea that reference to the pope will solve all our woes was prevalent. The pope must uphold Church teaching. And yes Church teaching wonderfully gives us surety in faith and morals via the pope (ahem, ex cathedra), but it's still Christ's Church. I am Catholic for all of what it means to be Catholic. The sacraments. The teachings. The surety of faith. It is easy to challenge a protestant on their lack of authority. It's much more difficult, and perhaps noble, to engage them in that disputed teaching they hold. Just mention the pope, be lazy, and life is good. 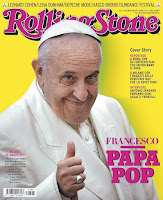 Until life isn't good. The fact is that we have a less than ideal pope at the moment, and we're seeing just how much power a pope does have. And it's shocking. The whole world groaned to find itself in papolatry.

Let's return to Cardinal Muller's beef. That only a pope can order the investigation into sexual misconduct by a bishop is unnerving. What if the pope, for personal reasons, decides not to? What if the bishop is his friend? His benefactor? His relative? Does the phrase "conflict of interest" ever apply to the pope? Is the pope above honest to goodness common sense? "Thou art Peter, and upon this rock I will build my Church. And the keys to the Newark prison are alone thine, if thou choosest to use them." That Jesus would give Peter, and Peter alone, the sole authority to investigate evil bishops is risky, foolish, and altogether unreasonable. When Jesus calls Peter to be the first pope, it takes a grand total of two verses for Jesus to then call Peter "Satan" (ahem, read your bible Cardinal Ouellet). But this policy of only a pope can investigate criminal misconduct of bishops existed in the time of Benedict, no? The only difference is there was never any need to think twice about it. Now that we must do a double take, it seems apparent our papal fanfare needs some revising.

Apologists reiterate that the pope is human. He sins and errs in daily life. Even Saint John Paul II allegedly went to confession every day. Vatican I, while teaching papal infallibility on faith and morals, in the proper context, is as much written to defend the idea that yes popes are sinners. Yet I won't go into Vatican I. In fact, enough of the theological speculation and examination of such nuances altogether. Let me say things more bluntly:

If the pope won't investigate accused bishops and cardinals. If he shuts down investigations which have already started. If he insists on being silent to serious allegations. If he and he alone gets to decide whether ex-Cardinal McCarrick, the greasiest filth of them all, should be brought to any semblance of justice (and not moved to live next to a school!).. If the pope does all this and then has an army of friends attacking anyone who disagrees with these actions... Then a day will come when the secular authorities will do the investigating for the pope. With all the tribulations this entails. Secular authorities will not care about the seal of confession. They will not care about a "papal secret." Nor a papal friend, papal supporter, papal benefactor. Instead it will be true and utter humiliation. Papolatry will fall to the ground like a certain angel once fell down from heaven. The papacy will be a bloodied mess. "Fix it or we'll fix it for you."

This is the chance. Go through that door and correct it. Let common sense prevail. Yet ironically only one man has the keys to this door.