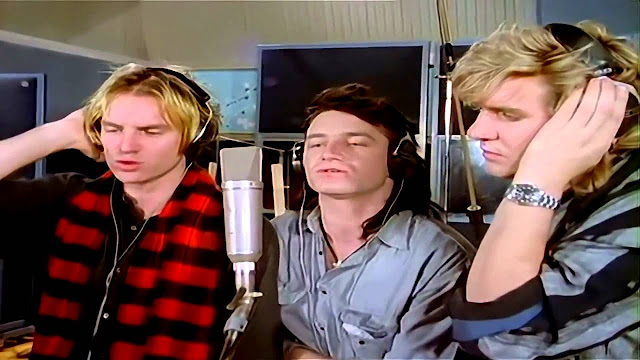 The 12 Days of Christmas: A hidden catechesis for Catholics while they endured persecution in England (1558-1829). You can read more about it here. This year I will be posting a Christmas song for each day.

I've chosen two catchy Christmas songs today. The first being Do They Know its Christmas by the conglomeration known as Band Aid. The second being Last Christmas by Wham's George Michael (who finds himself in both songs). Both songs came out in 1984. A year which was prefigured by writer George Orwell way back in 1949. The world was heading for evil, according to Orwell.

First thoughts? That's a lot of makeup. Second thoughts? Bono is short. Anything else? Ok, I'll state the obvious. They're sort of demeaning to Africans. Apparently Africans do not know its Christmas (I'm pretty sure the Christians there could teach us a thing or two about how to suffer for the faith). This song has aged awkwardly. Feed the world, let them know it's Christmas. Only we can save the world! Not exactly the story of Christmas and the true Saviour.

I was shocked that my wife had never seen this video before. So I showed it to her recently. She wasn't impressed. "C'mon, you know that all those couples are up to no good!" she stated. I immediately noted that she was a terrible person for being so quick to judge. Actually, I pulled out the worst reasoning a Catholic can give. "Yeah, but at least they aren't sitting around on their phones!" She had to admit that I had a point.

Ok, what is my point with this? The year 1984 was used by Orwell to show a future world embracing Communist chaos. The actual year 1984 was not so. At least not outright. Life was still lived in the realm of pseudo-caring for others, almost-innocent fun, and it was done without a rewired human brain which needs Instagram and YouTube to find purpose in life.

What of now? I would say 1984 is here. COVID-1984, as it is so lovingly termed, has done in all the optimism we find in my two Christmas songs. Feed the world? We have locked down the world, despite the increased warnings of mass starvation. Let them know its Christmas? Are we even allowed to say Christmas in public? Enjoy Christmas with friends? Stay apart!!! No gatherings! Laughter and play? Stick to your phones for entertainment.

I look back to the year 1984 with a tinge of sadness. No, it wasn't at all perfect. But it wasn't Orwell's dystopia either. That is for our times. Will it ever return to the way it was? No, I dare say we will never go back to last Christmas.