Showing posts from November, 2019
Show all

A top ten Christmas show list seems like a pointless endeavour. It’s mostly a matter of taste, and I doubt there’s a single person who would agree with all of my selections. For instance, I don’t have any A Christmas Carol productions on my list. I say go read Dickens directly. However, such a list could, if nothing else, let you know of some good shows you might otherwise not be aware of. And so, here is my list of top ten Christmas shows. 10 – Charlie Brown’s Christmas The “Hark/Hockey Stick” line alone makes this a classic.  In my clip I've included, if you watch while Linus explains the true meaning of Christmas, he drops his security blanket (0:34) as he says "fear not." 9 – White Christmas C heesy. Overdone. Outdated. And yet, Danny Kay alone is worth the watch. 8 – Home Improvement Christmas  This was one of my absolute favourites growing up. Tim Allen is a funny man. The fact that he would set a prime time Christmas TV show
Post a Comment
Read more 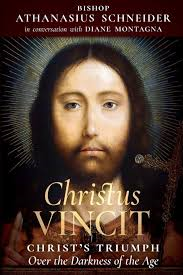 Following a week of lamentable meetings by the bishops of the USCCB, it is tempting to lose one’s hope that this Church crisis will ever end. The bishops, many of whom are spiritual offspring of Theodore McCarrick (though not all ), discussed a plethora of secularist liberal issues such as gun control and diocesan taxes, all the while mingling behind the security-laden walls of the four-star Marriott Waterfront hotel in Baltimore - not exactly a Carthusian monastery. The most accurate description of the meetings perhaps came the week prior, as a Crux headline read : US Bishops have their plates full during next week’s USCCB meeting. No doubt their wine glasses as well. In the meantime, trust in the American bishops to act as defenders of the Catholic faith has long since dissipated, though it seems many bishops are tone-deaf to this reality. Now would be an appropriate time to suggest that faithful Catholics are not entirely orphans, that there is a glimmer of hope. I speak of
Post a Comment
Read more

Should it be Goodnight for the Hardy Boys? 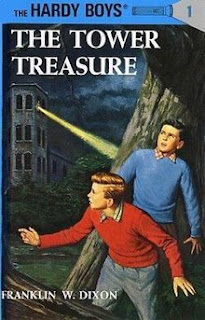 “Good night!” exclaimed Joe Hardy, the younger brother of Frank. Joe, a high school star in football, wrestling, lacrosse, swimming, distance running, weight lifting, chess, trigonometry, and theatre, looked worried as he hid behind a skull shaped rock while watching the head of the New World Order toss the Holy Grail into a potato sack. “Golly gee, I think the President’s phone call will have to wait until we deal with this!” replied Frank, who in addition to excelling in all school sports and subjects, was the youngest town councillor in Bayport’s history and a consultant for the State Senator. “Let’s get em!” roared the impetuous Joe. Joe knocked out the biggest crook first, with a solid right cross to the chin. Meanwhile Frank, with a flurry of punches to the solar plexus, was immobilizing the head of the New World Order against the skull shaped rock. Just then another crook, dressed like a tree, attacked Joe with an iron bar! Joe went sprawling to the ground in pain
2 comments
Read more

The Highway of Heroes

A must see every Remembrance Day. Here is the Canadian band The Trews with "Highway of Heroes."
Post a Comment
Read more 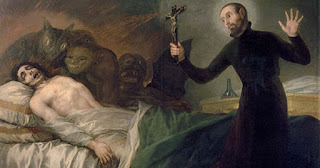 One of the more interesting interviews I’ve heard in a long time was done last week on the Patrick Coffin Show. You can find it HERE , or look for it as a Podcast. The interview was with Adam Blai, a man who has spent his life working in psychology and demonology. He helps train exorcists, and currently does work with the diocese of Pittsburgh. Blai presents a solid view of the Catholic understanding of obsessions, possessions, and exorcisms. The interview is not intimidating or chilling, but rather quite hopeful. He demonstrates time and time again that Christ works best through His Church. By all means check out the interview. If you don’t have time, here are a few notes… Possessions are caused by some violation of the first commandment, such as seeking some power other than God. Hmmm... Pachamama rituals anyone? To truly exorcise a possessed person is a lengthy process. On average Blai says it takes 6-24 months, and sometimes can go on for 20 years. It takes time
Post a Comment
Read more
More posts