The Bravest Thing: An Explanation

Thus begins J.R.R. Tolkien’s magnificent, prophetic, adventurous and unsurpassed entry into the world of hobbits, elves, orcs and even men. It starts humbly. Bilbo Don’t-Bother-Me Baggins lives a quiet life. He lives a good life, at least according to his somewhat self-centred whims and principles. Tea. Jam and butter. Bacon and ale. The world is out there, I am here, and the two should never meet. That is until Gandalf involves, rather forces, Bilbo in an adventure of recovering treasure for a collection of dwarves. As if Bilbo cares about dwarves. Or money. Or anything outside of his immediate area of existence.

There is a side of Bilbo in all of us. We want the good life. The don't-bother-me life. Ironically, or perhaps not, the word Bilbo literally means sword. God, or in this case a wizard (Christ as Prophet), beckons. One's wants may not equate to one's calling in life. All that Gandalf can promise Bilbo is that he won’t finish the adventure as the same person, if indeed he does have enough luck to survive. 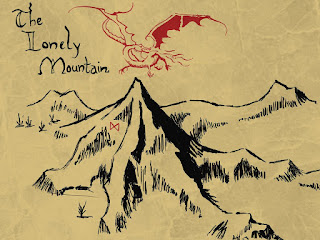 The Hobbit excites and captivates. Bilbo must grow into a new man, or rather a new hobbit. By necessity he matches wits with Gollum. He fights legions of giant spiders. He uses a secret ring to free his dwarf friends from the impenetrable Elvish prison. Yet this slow growth in character and strength is all a precursor to more impressively dangerous events.

Bilbo, upon entering the Lonely Mountain, must enter the lair of the dragon, Smaug, alone. Not even the bravest dwarf will accompany him. Who is Smaug? Is he still alive? Is it true he breathes fire and has destroyed entire cities? And who is Bilbo? Why is he here, at the foot of the dragon, instead of warming himself with fresh tea in his lovely hobbit hole? Bilbo is alone. He faces the greatest unknown. He is at war with himself. He is terrified. There are no “signs” of comfort. Just darkness. And then:

"It was at this point that Bilbo stopped. Going on from there was the bravest thing he ever did. The tremendous things that happened afterwards were as nothing compared to it. He fought the real battle in the tunnel alone, before he ever saw the vast danger that lay in wait. At any rate after a short halt go on he did..."

More often than not we fear the unknown more than any actual struggle we encounter. Bilbo later goes head to head with Smaug, risks betraying the dwarves for the cause of peace, and even remains in the midst of the battle of the five armies. All of which is easier than his initial struggle, alone in the mountain, to see the whereabouts of the dragon.

The message is straightforward. Stay connected to Christ. Read scripture daily. Be a person of prayer. Remain faithful to the Church. Be humble. The real battle begins before we even enter the arena to fight. The bravest thing is simply to say yes and go on.
literature