Not to brag, but I’m engaged in some high-end professional research right now with someone named John. However, I will let you be privy to the details. You see, a staff washroom at the school I teach at has a toilet not working properly. The handle sticks when you flush it. It’s an easy fix–I’ve checked. Yet it won’t be me who has the honor of restoring this throne to its former glory. I learned my lesson that one time I changed a lightbulb in my classroom and subsequently received a lecture on how that heinous act steals jobs from union members. I practically took food out of the mouths of innocent children by changing that light bulb. Not this time. The union kids will eat well tonight.

A company Help Ticket has been requested to fix the toilet. And–here is my research–I am now tracking the days… weeks… months…  before it gets fixed. In this new and improved world of equality and wokeness, just how long does it take for a toilet to get fixed? The question makes my brain swirl.

Growing up, the smalltown school I attended had something called a janitor–not a custodial sanitation engineer with required certification in climbing step ladders and putting gas in lawn mowers. He was a man who cleaned the school, checked on the boiler, repaired equipment, changed light bulbs, and, yes, fixed toilets. Life was simple. You hired a dependable handyman–there was no shortage back then–and things got done.

What happened? Where are such men? Not just the janitors, but all the men who literally built and maintained society? And why must everything now be allotted to blundering committees, synods, and other social programs spat forth from the depths of hell? How many custodial sanitation engineers does it actually take to change a lightbulb?

Enter Dr. Anthony Esolen’s latest masterpiece, No Apologies: Why Civilization Depends on the Strength of Men.

There have been many books released of late critiquing feminism while promoting a return to traditional masculinity. But none, I dare say, achieve the level of insight, brilliance, and brutality which Esolen’s work provides. It is the definitive arrow into the heart of a fallen society’s constructed irreality.

No Apologies is six full, rich, chapters long. Themes dealt with are Strength, Agency, The Team, The Family, The Vision, and The Father in Heaven. Right from the opening chapter, the examples provided by Esolen are nonstop bursts, swipes, and accurate stings of entertainment and insight. Ever wonder how the Romans built the aqueducts? The strength and planning it required? How high school boys routinely out-perform the best female athletes? Where men first learn–yes learn–to deny themselves so as to run headlong into battle, and why this is natural for them to do? Why didn’t one husband talk to his wife on the phone as he was about to take down a hijacked flight and crash it into the farmlands of Pennsylvania? Why boys invent endless games, with endless rules? Why might a man spend years of his life working on a seemingly obscure math problem? What kind of teamwork is needed to hunt buffalo? What does it mean to risk death? To lead a family? To lead a civilization?

No Apologies is a heavy dose of what I call shocking common sense. It should be–it used to be–as clear as day to everyone the role and complementarity of men and women in building families and nations. That it was not a disservice to women to rely on the strength of men–quite the opposite, in fact. But not anymore. Esolen’s words, I am sure, will shock and offend many. They will cause some to head for safe spaces, be activists for his cancellation (again), and shriek in woke horror. How dare he?! And yet, the book, shocking as it is in the modern crisis, is still a dose of common sense. “No on in our time looks askance at a woman living alone with five cats,” writes Esolen (p. 106). “And whole great sections of society, formal and informal, public and private, look askance at a happily married woman with five children who devotes her day to making a lively home for them. A lonely revolution has it been.” As a man with a wife and five young children, I concur.

I have pages of witty quotes I could share from No Apologies– “I have long heard it said that if men bore children, they would not be so eager to prohibit abortion. Of course, if men bore children, they would be women and not men” (p. 178)–however, it is best to simply urge everyone to read the book for themselves. I will merely conclude by saying the ending of the book, particularly Esolen’s insight into vision, is impactful. What moves men–what moves me –to tiring, profound, and seemingly crazy effort and action? In short, to see. An abundant two words, to see. Not just for this earth, but especially for what lies beyond. Unpacked and enlightened by Esolen, these words struck me deeply, perhaps as a needed dose of shocking common sense. Indeed, in this civilization of misery-in-equality and unfixed toilets, I can only hope that all who read these words go see for themselves what Esolen has provided in his latest masterpiece.

All is not lost. The strength of men is still there for the taking. For those who have eyes to see. 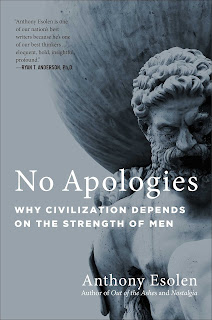 My latest book is out! Escape to the Wild. It's Count of Monte Cristo meets Hatchet meets Ma and Pa Kettle meets Wendell Berry meets... Ok, enough. Check it out for yourself.