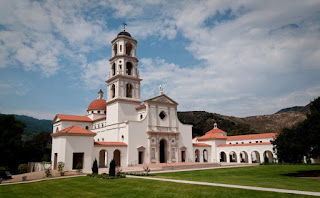 Peter Kwasniewski
16 hrs
I'm going to say something that's been on my mind for a long time.
Thomas Aquinas College, which I attended from 1990-1994, the alma mater of countless friends of mine and now their children, is a strange place, because at its heart is a fundamental inconsistency.
They study the Great Books, but they are not devoted to the Great Liturgy, which is the greatest work of art, theology, and culture ever produced in the bosom of the Christian West. They read the best that has been thought and said, but do not pray -- as a rule and as a community -- with the best that has been prayed and sung. In other words, their intellectual life is basically out of step with their Catholic life. In regard to the former, their pinnacle is St. Thomas Aquinas of the 13th century golden age; in regard to the latter, they are firmly post-Vatican II neoconservatives.
If the principles of the Blue Book were well understood and consistently applied, TAC would by now be a booming traditionalist mecca, a sort of counter-Vatican producing fully coherent Catholics.
As it is, TAC graduates too often fall into the trap of urbane intellectualism -- whose current poster child is their beloved Bishop Barron -- because they have not been taught and shown what is more elementary than any book, theory, or doctrine: the total embodiment of Catholicism in her central act of divine worship as matured over 3,000 years of Jewish, Christian, Greco-Roman, and Frankish-Germanic civilization.
𝘛𝘩𝘪𝘴 is the axis around which Christendom formed and revolved, not Aristotle, not Scholasticism, not Trent, not Papal Infallibility. Until we plant this axis firmly in our own minds and hearts 𝘢𝘯𝘥 in our institutions, we are dreaming if we think we will "fix the world." At best, we will create more or less secure ghettos for leading a reasonably sane moral life. That's a good thing, but it's a very partial thing, and has all the marks of a losing rearguard action.
The life and energy in Catholicism are in the traditional movement. When will TAC wake up to this fact and throw their not inconsiderable weight behind it, while allowing themselves to be humbly reintegrated into the great tradition?

If nothing else, Dr. K is arguing here for consistency at Catholic colleges (and I mean the truly Catholic colleges). You can’t claim to be steeped in the Catholic intellectual tradition of the Church, but then worship (which is the central act to all we do) using a Mass formed by a 1960s committee. It is rather schizophrenic.
I could say much about Dr. K’s thoughts and my own experience with Our Lady Seat of Wisdom College in Barry’s Bay, ON. However, I need more time to think things through. A quick answer would be to say that Seat of Wisdom, though a Catholic liberal arts college, does not claim the same degree of intellectual traditional study as St. Thomas Aquinas College in California. Traditional study? Yes. Great Books traditional study? Somewhat, but at least not as the founding principle. Not to say that lets Seat of Wisdom College off the hook.
One final note, I know a couple who went to St. Thomas Aquinas College in California, and it is there that they fell in love with the traditional Latin Mass. Perhaps the TLM is not the main show of TAC (just as the TLM is often pushed to the side when it is at a Novus Ordo parish), but, according to them, it certainly was available. However, being available, and making it at the heart of one’s college, are clearly not the same.
Photo credit: Lifesitenews.ca
Academy Education Mass