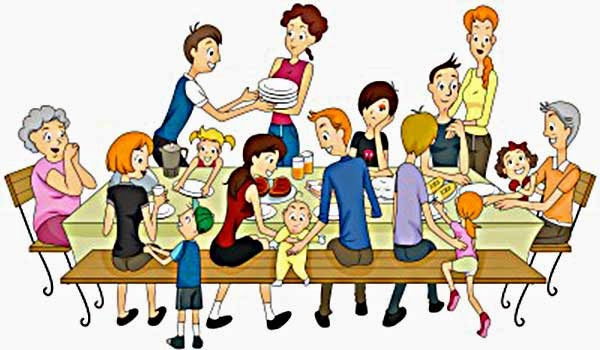 What does the exemplary Catholic family look like? How do its members carry themselves in public? Does the image of the Holy Family authentically radiate from their exhibition of joy and righteousness?

Picture this stereotype: a successful father and businessman, his attractive and energetic wife, and their eight wonderful children, entering a large passenger van. The father unhooks the beads from his rear-view mirror and leads the family in a pre-Mass rosary. The children, neat and tidy in noteworthy Mass attire, respond piously to each Hail Mary. Meanwhile, the mother makes one last check of her purse to ensure all necessary Mass booklets, veils, and prayer cards are in order. The father, looking smart with his Mass suit resting flawlessly on his broad shoulders, confidently pulls the van into the church parking lot, and stops the van.

The van is parked crooked. It takes up two parking spots. A car also pulls into the parking lot, but is now forced to occupy a space much farther away, and in the muddy section of the lot. The driver of the car shakes his head in frustration and mutters, “What a jerk.”

One can strive to be an exemplary Catholic family, and even appear so, but still be a thorn to others.

Undoubtedly these are arduous times to raise a family in the faith, much less be a radiant sign of hope for the world. Secularism and moral depravity are rampant, with sacrifice and moral rectitude daily being renounced. Families who choose the better part, as did Martha’s sister Mary, are certainly admirable. However, much is lost if these families are not practical-minded, and followers of common sense.

Thankfully most readers do not know me, and cannot rightfully tell me to take the log out of my own eye before noting the speck in the eyes of others. Nevertheless, permit me to offer some brief practical points for being an exemplary Catholic family.

Keep an eye on your kids, for heaven’s sake!

We need not have kids on a leash, though surely that would help sometimes… with shock collars too. Yet we also need not leave our kids in public to do whatever they want. Children running around misbehaving (e.g. ripping a place apart) has a very negative impact on how families are perceived. You could be the second coming of the holy Martin family, yet if your kids are tearing down the lobby of the hockey rink then there are problems at hand. When attending events, be it an after-Mass coffee social, or swimming lessons, it is the responsibility of the parents to go check on their kids once in a while. Is this not just common sense?

You would be surprised how often I see otherwise. There is no need to be overbearing, but there is a need to be a prudent parent. Check on the kids. Are they playing right? Who made that mess over there? Why is your son hiding under the table with a platter of cookies? Whose idea was it to build a tower of Babel out of stacked chairs? Indeed, families, especially Catholic families, need to do the world a favor by checking in on their kids in public settings.

Watch how you talk to your children in public.

Some parents will never contradict their children in public. As the saying goes: kids aren’t stupid. They will take advantage in these situations and deliberately act out. Other parents make a point of being the Machiavellian authority, and will loudly berate their children in front of the public. Both methods are unreasonable, and put others in awkward positions. It is unpleasant to hear a dad put on an Incredible Hulk impersonation over a child making a small mistake. It is repulsive to hear a child put on the same Incredible Hulk persona over a parent for the sake of procuring more candy.

Be kind. Be firm. Sometimes an outing just isn’t working, and you need to leave the place early. That is ok. Again, be prudent. But know that others are watching.

Show up on time.

Easier said than done. Period. There are few things more dismaying than rushing out the door to an event before realizing… the smell. Yes, a diaper needs changing, and you are now officially going to be late. Really though, being on time can be accomplished, most of the time. Work at leaving earlier. It will eventually become a habit. Perhaps most importantly too, it will teach your children to do so when they are older. Do not frustrate others by showing up late when it is avoidable.

Prayer-train your children for silence.

Can anything be more practical than living each day in a spirit of prayer? As sure as gardens need rain, momma needs coffee, and Jesuits needs attention, the soul needs silent prayer. How much more so do parents.

Having children makes this seemingly impossible. Yet one cannot simply say: "I guess I will pray again once the kids are out of the house... in fifteen years… assuming my wife isn’t pregnant (?)." It is possible to get this much needed daily prayer in now, though it may take some training.

It is beneficial to wake up before the children do. But even if the kids get up with you, or before you, all is not lost. It is possible to have children stay quiet in the morning. Older kids can pray and read. Younger kids can look at a book, or play with a quiet toy. People potty-train kids. Some even sleep-train kids. I say, why not prayer-train them? Not every day will be perfect, just as not every day in prayer is an overwhelming success. But it can be done, and by God’s grace, done well. Only by silent mental prayer (in addition to family vocal prayer) can a family fulfill its mission to the world.

Other examples abound, such as developing solid friendships, playing sports, getting enough sleep, feeding the little kids before Mass, and so forth. Ultimately the main idea is that families need to carry themselves in a proper and practical manner. The exemplary Catholic family requires not only spiritual fervor, but plain common sense. Being a hopeful sign to the world includes being practical.
Catholic life Family