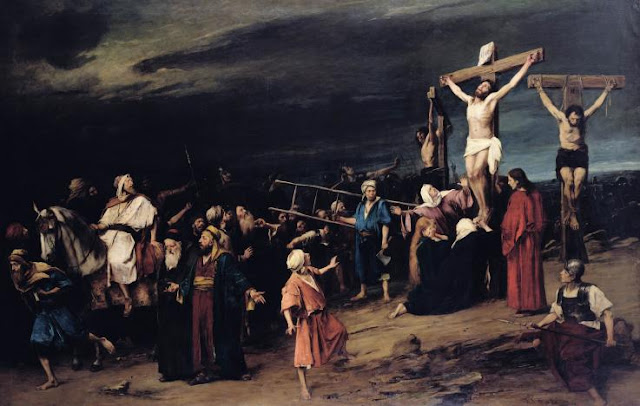 The purpose of this post is not to take shots at the perturbed Fr. Larry Richards, who wrote a book titled Be a Man. Though I do write this with a mind towards those who insist we are "an Easter people" without any real inclination of what that entails, nor the path one must trod to live as such. Rather, let us simply look to Christ to find out what a real man, especially a husband and father, is.

Jesus was laid on a cross. His arms were most likely dislocated as the Roman soldiers stretched them into place. His hands and feet were then nailed to, as St. Alphonsus Ligouri calls, "this infamous gibbet."

Hands are rather delicate, and contain some of the most sensitive nerves in the body. These nerves pass through the wrist. The Romans knew this, and knew how to puncture the palms, into the main core of nerves near the wrist, when crucifying a man. It is said that the burst of pain from this puncture is comparable to a woman giving birth. It is also said, by Cicero, that no Roman citizen should ever watch a crucifixion, for the torture was too inhumane. Indeed, Romans never crucified Romans; hence, St. Paul, as a Roman citizen, was stoned to death.

So Jesus was suspended on the cross. Yet when He hung down, He was immediately choked, and gasped for air. Thus, Our Lord had to pull Himself up for a breath, which shot bombs of pain throughout his arms and legs, similar to how "a woman with child and about to give birth writhes" (Is. 26:17). Down He would slink in pain, only to gasp for air. Upwards He would pull Himself, exploding in pain, desperate for oxygen. Down again; only to attempt to pull up his beaten corpse. For three hours, while being derided by soldiers, priests, and criminals, he hung in agony.

Christ then gave Himself over to death. Blood and water later gushed from his side, perhaps indicating a lack of oxygen as the cause of death. It was an unfathomable torture, born innocently and with perfect love.

And Sacred Scripture tells us: "Husbands, love your wives, just as Christ loved the Church and gave Himself up for her" (Eph. 5:25)

This is what it means to be a man.