I wrote recently about living the traditional Catholic faith at home, even without the presence of the traditional Latin Mass. You see, in my parts TLMs are rare, and such actions become necessary. However, I will now add that there is hope for the future.

With that, I offer a brief update. Our family was, in fact, able to make it to a TLM over the Christmas break. Our first since July.

Never mind the continuous 35 below weather in Saskatchewan, nor the snowstorms and blistering winds which have accompanied these Christmas Siberian temperatures. Quite simply, over the Christmas break an FSSP priest hopped in his truck and drove 3000km, all the way from Ottawa, just to come and offer the holy Mass throughout the week of Christmas.

I am humbled and amazed at what this heroic priest did. It boggles my mind. Really, it does. May God reward him abundantly.

Well, the Mass we attended was New Year's morning. The church was full. The choir was great. The priest said Mass most reverently, and he preached with fire. I still sigh as I think of it.

But I want to end with a quick word about the effects caused by this priest's stunning effort. For one, the families we talked to afterwards were glowing with joy. It was a Christmas they will never, EVER, forget.

However, closer to home, I cannot help but recall how our youngest son, Jude, sat mesmerized throughout the entire Mass. And now, since we arrived home, he's done something he's never done before. That is, he's taken out our Mass set and offered play Masses. Daily. Often several times a day. He is saying Mass as I write this, in fact. "I Father Webb!" he proclaims, before singing his Asperges, offering frequent Dominus Vobiscums, and elevating the sacred host.

It is quite remarkable to see. Whatever is going on in his little brain, I cannot say. But I can say that this recent TLM, born out of heroism and love, had a deep impact on him.

From one heroic priest, perhaps another priest rises. 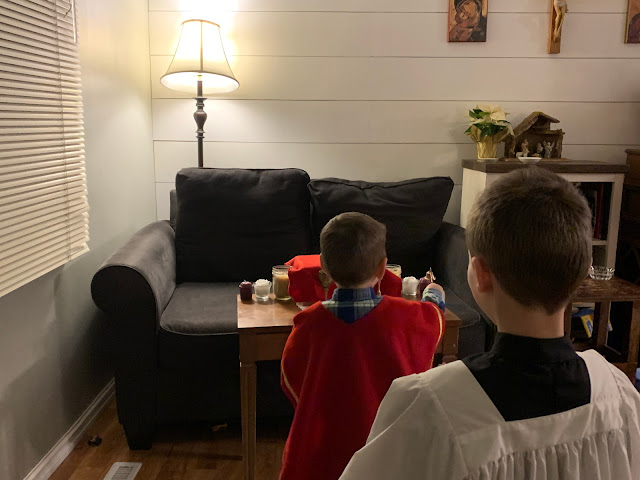