Olympic Equality on Full Display in the Pool 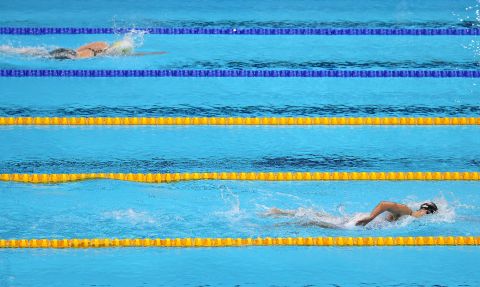 For the first time ever, the Olympic games held a mixed 4x100m relay medley in the pool. This meant that each team had to race two men and two women. They were permitted to align the swimmers in whatever order they chose, based on individual strengths and overall strategy. How interesting. In a sense, you would see the best male swimmers versus the best female swimmers, head to head at various points.
The race began, and immediately the countries that started with men raced out to an early lead. The lead was not shocking, but it certainly was not flattering. The men simply powered through the water like sharks. The women, no doubt world class athletes, seemed like Sunday drivers in comparison. In the end, the race evened out, and Great Britain won the gold. It was... entertaining... to say the least.
Though somewhat amused, I was also slightly taken aback. Why would the Olympics do this? Why would they showcase just how much faster and stronger the men were? Wasn't that embarrassing for the women?
Just then the announcers cut in:
"Wow! What a fantastic race! Now that was gender equality!"
Oh, right. I keep forgetting.
image from cnn.com
Sports