A Catholic Fairy Tale of Sorts 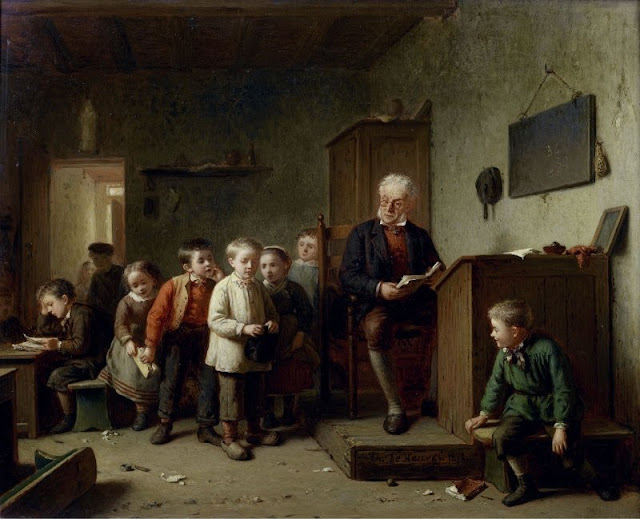 “Mr. Millette, can you please tell us a story?” asked the students of a grade five class.

“You’re just trying to get out of work. Besides, I can’t just think up a story on the spot.”

“But you’re so smart!” came the shameless reply. It is alarming how students these days actually think flattery will get them what they want in life.

There was once a cheerful grade five class. The teacher loved his students, and his students loved their teacher. Sure, there were problems in the classroom, some of them rather serious, but there was also a sense of hope and belonging. The classroom was a refuge for all, and it was cherished as such.

One day the beloved teacher suddenly announced to his class: “I quit. I will no longer be acting as your teacher. Instead I will stay in my tiny office room at the back of the class. From there I will think about you frequently, and might even poke my head out once in a while. I think this is the best for everyone.”

The students were stunned. Nothing like this had ever happened before! Before they could begin to ask questions the teacher helicoptered his way to the back room and shut the door. A loud click echoed as the door locked.

“Now what will we do?” asked a frightened child.

“We have a teacher,” announced one of them. “Mr. Sjors will take over duties. Change is good.”

The two men with the greasy smiles parted, and out walked Mr. Sjors. He stared at the class. The class stared back. Awkward silence wafted through the room. Finally Mr. Sjors raised a hand in greeting, and spoke:

“Let me be frank with you. I think you’ll find I’m a lot like your old teacher. He was such a good guy. What a shame. But I think it best if you focus on me.”

Thus began a terrible new chapter for the students. The class was immediately divided. The students who previously caused trouble suddenly found themselves the new teacher’s pets. The generally good students were insulted. Everything was turned upside down. Traditional math was frowned upon. They were told that following basic rules was a sign of hating school. Asking questions was seen as mutinous behavior. It was surreal.

One day Mr. Sjors walked to the back of the class and knocked on the door of the tiny office. The old teacher, dishevelled and shellshocked, appeared and handed Mr. Sjors a red binder. Mr. Sjors smiled, slammed the door, and walked out of the classroom for a few moments.

“What was that all about?” asked a frightened student named Taylor.

“Who cares,” replied his former friend named Ann. “Did you see our old teacher? He didn’t quit. He’s still in his office! He’s still our teacher!”

“But that makes no sense! Is he? Or is it Mr. Sjors? Or both? Or none? I’m so confused!” came Taylor’s response.

Just then Mr. Sjors, with fresh ashes on his shirt, returned into the classroom.

“Mr. Sjors!” shouted an obnoxious teacher’s pet named Jimmy, “some of the students were talking about you. And it wasn’t all good.”

Mr. Sjors flew into a rage. His wrath erupted like Mt. Etna. A young lad of Chinese descent was sent to clean toilets while the janitor paid off Mr. Sjors handsomely. Another student was abruptly accused of stealing from Mr. Sjors, and sent to the principal’s office. The class was in disarray. It was a nightmare. To make matters worse, Mr. Sjors then wrote a letter on the whiteboard praising Jimmy for his loyalty to the teacher. Jimmy cackled obnoxiously.

“What a time to be alive,” moaned young Taylor.

“I’m so happy! So very very happy!” bounced Jimmy, flapping his wrists like a bird.

One day the students filed into class as usual. There was a deadened expression on their faces. Even Jimmy, so used to being the teacher’s pet, noticed that his successes as a student were coming too easily. However, Mr. Sjors never showed up that day. The class waited and waited, but their teacher never walked in. So Ann jumped up and shouted:

“Finally, let’s break into our real teacher’s office and let him loose!”

Thinking this couldn’t hurt anything, several of the students jumped to the back of the room and started kicking down the door. Eventually the door gave way, and excitedly the students rushed to retrieve their old teacher.

He wasn’t there. Instead, there was a note which read: “Sorry it had to be like this. Really. I am in a better place now.”

The class sat down in stunned silence. They certainly weren’t in a better place. Eventually two men arrived. They had greasy smiles on their faces, and announced a new teacher. It was a friend of Mr. Sjors.

A large THUD was heard as Taylor passed out.

“Wait! What?” shouted the students in Mr. Millette’s class. “That was the story? There’s no way something like that would ever happen. You would never quit. Right?”

Mr. Millette reached into his pocket and secretly fingered his rosary. It was a special rosary blessed by one Pope Benedict XVI.

“I suppose not... What was I thinking? Now get to work already.”