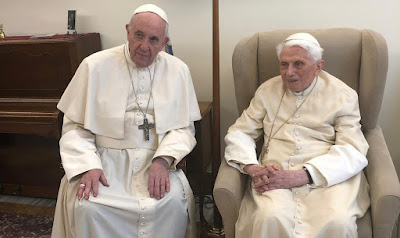 In 1958 there was a belief, among a very small minority of Catholics, that John XXIII was not validly elected, ergo, there was no pope – sedevacantism.
Last week I weighed in briefly into the modern soon-to-be-sedevacantist idea. That is, a small minority of Catholics believe that Benedict is still the pope, and that Francis is an anti-pope. I wrote here demonstrating the logical conclusion of such a belief. Long story short, when Benedict dies it becomes 1958 all over again.
This time around, however, there is a further consideration: the internet.
The internet can spread ideas rapidly, and can make adherers to such ideas rabid. For instance, I was labelled, among other things, a “prophet of despair”, a “snoot”, and a “freemason” for stating that Francis is the pope. I can only imagine what I would be called if I said that water is wet, snow is white, and puppies are fluffy.
There are two things I would like to share from this, to be honest, amusing experience.
1 - The scattered arguments from the Benedict is pope crowd.
Just today I was drawn to two prominent websites for this belief. The first had an article titled: “All Who Accept Bergoglio as Pope are in Formal Schism from Jesus Christ”. You’ll never guess what the article was about. As for the second article, posted at the exact same time on a different website, it was a piece explaining that those who think Benedict-is-pope are not in schism because – follow the reasoning carefully - a person cannot be in schism if they doubt the validity of the pope.
The reasoning of the first article is that you are in schism if you doubt that Benedict is pope. The reasoning for the second article is that you are not in schism if you doubt that Francis is pope. They argue directly against each other.
But whatever. We all have truly more important things to worry about than what such people think. Let's briefly turn to my second, more hopeful, point.
2 - We have a wonderful shepherd in Bishop Athanasius Schneider.


I only write this to show what an amazing man he is. The day after my article was published, I received a message (through a colleague) from Bishop Schneider supporting me up for what I had written. Schneider’s encouraging words made my heart soar. But he didn’t stop there. Later in the week he had a full out refutation of the Benedict-is-pope theory on Lifesitenews, as well as on the Dr. Taylor Marshall show. In other words, he immediately stood up and took all the heat and criticism from the Benedict-is-pope crowd and placed it on himself. Again, what an amazing shepherd.
It is reassuring to know there are good men we can trust. Maybe I should start a movement declaring Schneider to be pope?


Some people will believe anything, after all.