On Saints, Sinners, and Stealing Statues 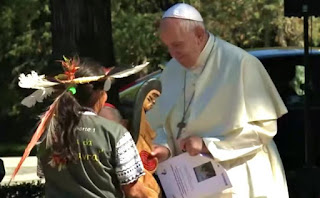 Mark Twain popularized the aphorism that truth is stranger than fiction, a verifiable fact when considering the lives of the saints. The stories of the saints are as eccentric as they are venerable.

Take, for example, St. Symeon the Stylite. Unable to gain enough prayer time due to a following of devotees (he sounds like me with my children), he spent 47 years living atop a pillar - the last pillar being over 50 feet high. St. Denis, after being decapitated, picked up his head in his hands and walked six miles, all the while preaching a sermon on repentance. To the chagrin of the altar boy present, St. Lawrence of Brindisi would take upwards of sixteen hours to say a Mass. St. Philip Neri, in the pursuit of humility, once shaved only half of his beard. And perhaps my favorite story of all, St. Gabriel of Our Lady of Sorrows walked unarmed in the midst of twenty Garibaldi Red Shirt soldiers who had kidnapped a young woman. Gabriel swiped a couple of pistols from the nearby soldiers, shot a lizard with deadly precision, before turning the pistols on the soldiers. The soldiers dropped their weapons and fled.

Revelling in the glorious lives of the saints is but a preface to the latest issue plaguing our Church, and particularly the Eternal City of Rome: Wooden statues of a naked pregnant woman. These idolatrous statues represent, according to Dr. Paolo Ruffini, Prefect of the Vatican Dicastery for Communications, “life, fertility, mother earth.” They of course were stolen, as a pistol is stolen from malevolent soldiers by St. Gabriel, and sent to slither down the Tiber River - unfortunately they have allegedly since been rescued and revived.

But let’s focus in on the initial “theft” of these unnerving statues. Catholics of good will cried shouts of joy at hearing the glad tidings – the time to act as saints has arrived! Ambivalent Catholics cried shouts of “racism” at the news –for everyone knows that the Amazonian people are incapable of accepting the Faith sans nude pregnant woman figurines.

A central criticism is: Who do regular Catholics think they are to invade churches and do dramatic acts, as if they were some kind of saint? Surely they are not the saints of old, such as St. Benedict, who destroyed a pagan altar on the top of Monte Cassino. Non-saints acting like saints, it is argued, is not at all prudent, for it merely leads to eccentricity and civil disorder.

To illustrate, I am thinking of a morning nearly ten years ago. My wife and I were just married, and about to drive to Quebec on our honeymoon. We stopped at a church for weekday Mass first. Minutes before the Mass began, the pastor calmly strode to the microphone and asked that the person responsible for leaving certain literature at the back table of the narthex, literature evidently condemned by the Church, stop doing so.

Suddenly a lady jumped up from her pew, and started bewailing the priest. “Excuse me! No Father. You’re wrong!” she scolded him, with many other inspired words.

“Go back to your own parish!” the priest brilliantly replied, for he evidently knew she had once been told to leave from there.

It was a romantic start to the honeymoon. “Dear,” I would tell me new bride, “your eyes sparkle with fire… like a crazy woman yelling at a priest.” At least it was more romantic than staring at a naked pregnant woman stature in a church.

Which brings us back to these same pregnant nude woman wooden statues (that people have bowed to while offering incense, chants, and parading it around churches while calling it a symbol of mother earth – if you’re still uncomfortable calling it Pachamama). When we try to act as saints, and remove these statues from Catholic churches, do we simply come off as a crazy lady yelling at a priest before Mass? Do we appear angelic, or eccentric?

We are in a Petit Prince situation. One scene from this famous World War II era French book has the Little Prince visit a planet occupied by a drunkard. The drunkard drinks in order to forget the shame caused by being a drunkard. As such, we are not saints because we, in part, do not act like saints. We do not act like saints because we know we are not saints.

The pivotal message is this: Though we may not be saints, we can still be sane, and act with sanity. Witnessing and approving idolatrous statues in a Catholic Church is not sane. It is against the first commandment, as any sane Catholic should be able to recognize. Removing these statues is actually very sane, as multiple passages in the bible will attest. It is simple. Jesus warns, “You hypocrites, you know how to discern the face of the heaven and of the earth: but how is it that you do not discern this time?" (Lk. 12:56). "You hypocrites," he might say now, "you know how to discern that people lack the holiness of saints: but how is it that you do not discern that idols have no place in My house?"

Pray to become a saint. Sacrifice to become a saint. But when faced with obvious evil, do not hesitate to act like a saint. “Follow the saints, because those who follow them will become saints,” commends Pope St. Clement I. What would a saint do in the midst of idolatrous statues in a Catholic church? They would recognize what is sane, and what is sacrilegious - what is an image for dialogue, and what is an icon for paganism. Then they would act accordingly.

We are all called to be saints.