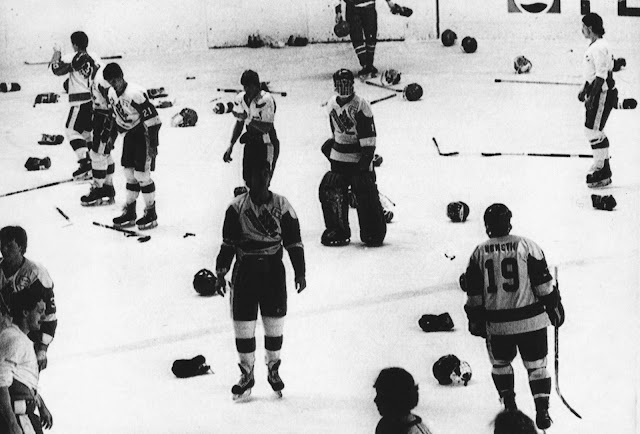 A guilty pleasure of mine is that I love a good hockey fight. I will blame this barbaric inclination for fisticuffs on my Saskatchewan blood. I particularly enjoy the eruption of an all-out hockey brawl. Gloves fly; all skaters grab a "dance partner"; the teams respectfully work through their animosities. Perhaps this is not the saintly way to solve a disagreement, though I counter that Pope Francis' synods and summits would be far more productive handled the hockey way.

Well it is certain that Holy Mother Church has an epic brawl on her hands. Modernists and faithful Catholics are aggressively fighting for the very future of the Church. Yet as the gloves fly off, a most surreal scene is unfolding: traditional Catholics are battling one another in these blessed fisticuffs. That is, many are deliberately squaring off against their own teammates.

It is perplexing, and cause for great shame. Of particular concern is the rancor, often seen in the comment sections of Catholic blogs, directed towards the few remaining leaders in the Church who bravely resist the Pope Francis revolution. These prelates are not perfect, and for some that is cause enough to expend valuable energy in condemning diminutive weaknesses in their leadership. They are, quite simply, not the quintessential ecclesiastic.


For instance, on the list of not-good-enough leaders is Cardinal Raymond Burke, one of the four dubia writers, and all around disturber of the progressive peace. Burke is culpable of saying the Novus Ordo Mass at times, and to date has refrained from formally correcting Pope Francis. Such cowardly indolence.


And there is Athanasius Schneider, the well-known Bishop from Kazakhstan, who confronted Pope Francis, to his face, on the issue of God willing the diversity of religions. Pope Francis made a Peronist response; Schneider decided it best to let the issue rest. What an ineffective prelate.


As for Cardinal Robert Sarah, although at times he drifts in to speak a few words of sanity to the Church, he seems more willing to urge Catholics to holiness and repentance as a means to fight Church corruption. Have you ever seen a more lethargic Curia member?


I wonder if it is time to jump on Bishop Joseph Strickland of Texas. Strickland is known for publicly reproaching his fellow U.S. bishops’ wretched response to clerical abuse, yet it is an undeniable fact that he was once beaten in a push-ups competition by a much younger member of his diocese. Lord deliver us from this fragile Texan.

These Churchmen are not alone in their inability to display ceaseless perfection. The Catholic Church’s history is actually replete with such unworthy shepherds. I can only imagine the animosity past leaders might endure if they were alive in our modern internet paradise.


Indeed, remember the priest who thrice attempted to desert his parish? One would assume he would be condemned to the everlasting fire. Not so. Rather the Church declared him the patron saint of all parish priests. Apparently even the devil would agree with this assessment, for the evil one allegedly spoke that if there were but three St. John Vianneys in the world, his own kingdom would be shattered.


As another example, St. Bernard of Clairvaux's extreme asceticism nearly starved his fellow monks to death. Yet he spiritually nourished those around him, and fought diligently against the election of unworthy men to the episcopacy. Shall we discard his cherished example for troubled times?


Many believe that St. Pius X erred when nearly 1500 years of tradition was done away with by his reforms of the Divine Office. Yet St. Pius X's writings against modernism are of inestimable value for Catholics fighting to uphold Tradition. Shall we scorn the wisdom of his teachings?


St. Jerome had the temper and salty language to make UFC fighter Conor McGregor blush. Yet St. Jerome's humility produced such heartfelt sorrow as: “I am like the sheep that went astray. O Good Shepherd, seek me out and bring me home in accord with Your will.” Shall we denounce his heartfelt humility as nothing more than a haughty masquerade?


The stigmatic priest, St. Padre Pio, was angelic in holiness. He also had a distinct human breaking point, and admitted to even feuding with his guardian angel on occasion. He once wrote: "I shouted at him harshly for having made me wait so long [during a demonic attack], since I had not failed to call him to my aid. To punish him, I did not want to look him in the face, I wanted to hold my distance, I wanted to run away and hide from him.” Shall we condemn this intrepid saint? Or rather, could it be there is much to learn from St. Padre Pio’s intimate friendship with his guardian angel?

In reality, the holy cleric who is faultless simply does not exist. Yet our current good shepherds are still treated woefully, not only by progressives but also some traditional Catholics. The words of St. Theresa of Avila, once boldly directed to God, apply well here: “If this is how you treat your friends, no wonder why you have so few of them!”

The real battle must be waged against those who truly work to destroy the Church. The hockey gloves must fly and the true enemies of Christ be challenged. This is our duty. Let us follow St. Paul’s example and fight the good fight; not fight the good fighters.