If Only this World were Stuck in a Rut... 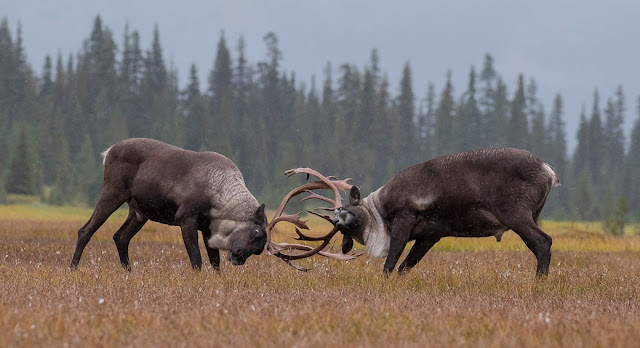 Take a step back and enjoy this little write up by the Jasper National Park team:

"It is caribou rut season! During this time, the bigger the antlers, the better!

Antler size allows males to easily size each other up. A smaller male will rarely challenge another bull who is larger, but drama is bound to brew when two males of similar size meet up. When nobody backs down, they will battle it out to see who is strongest. These fights can be intense and incredible to watch.
Earning the title of 'dominant bull' is not an easy task. During the rut, a dominant bull spends a LOT of time and energy chasing away younger competitors – these big guys barely have any time to eat or rest. Only the strongest and most determined males can withstand such a challenging task. The ones that succeed have an opportunity to become fathers to the next generation of caribou calves. Something worth fighting for?

There is something raw, terrifying, and simply splendid about nature. I find the outdoors to be a great refuge in these senseless times. Nature is so real. Our created epoch is so fake.

Imagine juxtaposing this tidbit on the caribou rut season versus anything going on right now. For instance, the Vatican this week started a synod on synodality (whatever that means), where a bunch of greasy men who wouldn’t last one day in a real job get to spout meaningless sentences about listening, accompaniment, and new pathways.
It is a fake, putrid, and meaningless existence when you hold a "synod on synodality."
Meanwhile, in the real world of nature, caribou are locking antlers and fighting like heck to defend their territory. They don’t put up with namby pamby little halfwits trying to destroy their lives. They live and die for what is real.
The lesson from nature should be obvious to the rest of us.
Photo Credit: Mark Bradley - Jasper National Park Facebook Page
Nature Vatican