Book Review - Blessed Charles of Austria: A Holy Emperor and His Legacy 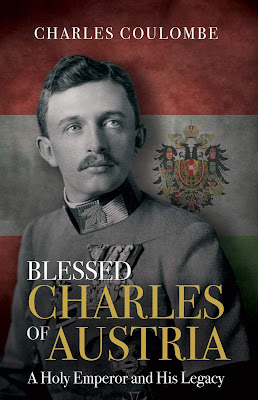 Blessed Charles of Austria: A Holy Emperor and His Legacy
Charles A. Coulombe
TAN Books (also available on Amazon)
388 Pages
In a dromocratic world where everything we do must be up-to-the-millisecond, why write a review of a book that came out *gasp* last year? Still more, why write a review for a book on the last Holy Emperor, as though a Catholic monarchy were, begrudgingly, anything more than a pipe dream in our current democratic - rule of the mob - days of Trudeau and Biden? A few thoughts on this:
1) I initially ignored this book. However, people just wouldn't stop talking about it, and so I finally read it.
2) I can see now why people have continued to talk about this book. It clearly is of immense quality, and it deserves to be enjoyed by many others.
3) Though signaling the end of an era, the life of Blessed Charles, as you will see, is most applicable to our own lives, and in our own times.
Blessed Charles of Austria begins with a mini-history lesson on the Holy Roman Empire. Warning: Some may get lost by the avalanche of names and events thrown at the reader. I thoroughly enjoyed it. Most of my university studies were done over 10-years-ago, and the quick historical refresher penetrated my muddled mind with rays of academic light.
With the historical table being set, Charles Coulombe delves into the life of the holy Habsburg, Blessed Charles. It is a tale of intrigue, heartbreak, suffering, virtue, ominous dreams, and supernatural faith. Coulombe has not merely written a historical account, he has spilled his enthusiasm, brilliance, and passion onto the pages. The effect being that the reader becomes a part of the story. We feel what it was like when Franz Ferdinand was assassinated. We can see the colours and pageantry of Blessed Charles' coronation. We can taste the bitterness and betrayal of so many worldly and small-minded men who sought "progress" over peace. We can experience, in some small way, how a truly saintly man (and woman, to mention his wife Zita) continues on through it all, faith unshaken, love unbounded.
If I may, here is a brief snippet from Blessed Charles' final moments:
"At one point, as Zita was saying one short prayer after another into his ear, he said the last words he would ever speak to her in this world, 'I love you so much.' Charles tried to lift the crucifix he was holding to his lips, but he was too weak, and let it down, sighing. He then said, 'I can't go on,' after which, 'Thy will be done... Yes... yes... As you will it... Jesus,' and died with the holy name on his lips. [...]
"It was noticed by onlookers after Charles was laid in his coffin that the face of the dead emperor appeared to be getting younger and younger" (pp. 265-266).
Not at all a boring historical account, wouldn't you say? But then again, as those familiar with the author can attest, the words "boring" and "Coulombe" have no part with one another.
* * *
As a brief aside, did you know that Karol Wojtyla was named after Emperor Charles? And that in 2004 it was the same Karol Wojtyla (JPII) who beatified Blessed Charles? Such was the impact of this young Emperor. And further, have you ever heard the story of how a deceased Emperor is laid to rest in Austria? It is fascinating... but you will have to read the book to find out more.
* * *
I will conclude by claiming that the life and legacy of Blessed Charles applies to our times as well. There is much I could say in this regard, but I will restrain myself to one central thought. I cannot help but think of the past 18 months. We have been enduring one persecution and betrayal after another. Jobs have been lost. Loneliness has been mandated. Breathing regulated. Physical "health" has become a god, while spiritual health has been separated from God. Insanity reigns. Holiness is exiled. Even in the past few weeks I think of my own provincial traditional Latin Mass organization. We, the lowly laity with a host of children to raise in the faith, have, for the time being, had the Mass - the same one cherished daily by Blessed Charles - taken away. The sheep are scattered. Everything seems to be coming undone. It is a burden which feels too heavy for us.
Well such was the life of Blessed Charles. He inherited a war and a revolution which gave him approximately zero chance of success. Yes, he may have been too trusting and kind (if only I had "faults" like that), but his life seems to have been one short and grueling sprint of unimaginable suffering. Every turn was met be a prodigious cross. Every step forward brought a heavy blow. It should have crushed this royal couple. It should have turned them to dust, or at the very least sent them to an institution. It did not. The faith of Charles (and Zita) is perhaps amongst the greatest you shall ever witness. It is what happens when souls are formed for greatness, and when hearts are transformed by the love of the Sacred Heart.
Charles Coulombe has written a superlative book. How fitting, for the book is written for one who lived a superlative life.
Blessed Charles of Austria, pray for us.
Books Holiness saint