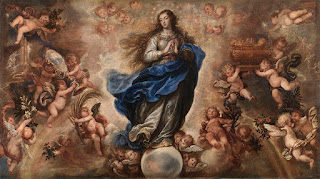 Positive Thinking: The Solemnity of the Immaculate Conception is so profound and magnificent, our family celebrated it twice.

Realistic Thinking: What the heck?

Let me begin with a short extract from Fr. Gabriel’s famous Divine Intimacy:


“The Feast of the Immaculate Conception is in perfect harmony with the spirit of Advent; while the soul is preparing for the coming of the Redeemer, it is fitting to think of her, the all-pure one, who was His Mother.”

Faithful Catholics love December the 8th, the day honouring Mary’s Immaculate Conception. It is also my local parish feast. So this year our priest dutifully planned a large parish meal, a refurbishing of our Marian votive area, and a special consecration to Our Lady. The problem is that he planned everything for December the 8th. I pointed this out to him. In a liturgically sane world he would’ve looked at me as if I was losing my mind. But it’s not a liturgically sane world, and I had to correct the good Father.

As for my own local parish, the one that made such grand plans for Dec. 8… at least they had an awesome meal to celebrate the second Sunday of Advent. Somewhat sheepishly, our priest offered a morning Mass on Dec. 9th for Our Lady. Hence, my family was able to participate in two days of celebrations for the Immaculate Conception, with the former celebration being a full and glorious affair - the latter celebration having us double the size of the congregation.

It seems the Novus Ordo calendar does not do well with multi-tasking, as though liturgical “tension” is to be avoided at all costs. Take September 8th, Mary’s birthday. It was on a Sunday this year. It was completely removed from the Novus Ordo calendar. In the traditional Latin Mass the Sunday celebration, and Our Lady’s birthday, were combined. As far as I know, nobody died or lost their faith because of it. Rather, “tension” was replaced by common sense. It’s like hosting a meal, and a guest brings along some homemade brownies, even though you have the scent of fresh baked pie wafting throughout the house. One could pretend that the pie smell is not there, or lie and say that the pie is for another day, and simply eat the guest’s dessert. Or, one could share both desserts. Ignoring the obvious smell of the fresh pie is… awkward. Sharing in both is festive.

I noticed a similar tension this year with the December 6th call (by four exorcists) to pray and fast in reparation for the idolatry in the Vatican. Particularly noticeable, by some who follow the Novus Ordo calendar, was a frustration over the timing of this event. Dec. 6, which also happened to be the First Friday in Advent, was also the optional memorial of St. Nicholas! How can people fast in reparation when there are little kids expecting candy in their shoes?

This is a false tension. Adults can fast easily, while still honouring the optional memorial to St. Nicholas. As for kids? They probably won’t understand what “the idolatry in the Vatican” means. Fill their shoes with candy if you wish. The two sides are not irreconcilable.

All in all, the complexity of the Novus Ordo calendar comes across as forced. Rather, a calendar that has been organically developed, as with the traditional Latin Mass, presents a “chillness” to the liturgical year. When to fast and to feast, or even to feast and to feast some more, should be simple to Catholics, especially when heeding the Faith’s rich ancestral wisdom.

Positive Thinking: Catholics will reflect on how this year’s shuffling, or cancelling, of Marian feasts is not becoming of the Church. Grumblings for a return to common sense will arise.