The Smoke and Mirrors of St. Chesterton 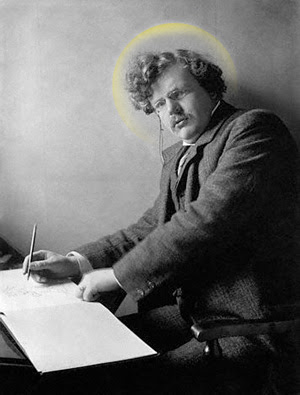 GK Chesterton's cause for sainthood has met a major stumbling block. According to the Bishop of Northhampton, Most Reverend Peter Doyle:


“That conclusion is that I am unable to promote the cause of GK Chesterton for three reasons. Firstly, and most importantly, there is no local cult. Secondly, I have been unable to tease out a pattern of personal spirituality. And, thirdly, even allowing for the context of G K Chesterton’s time, the issue of anti-Semitism is a real obstacle particularly at this time in the United Kingdom.”

Now if you have ever been to a Catholic college (as in non-Jesuit, but rather truly Catholic), you will be familiar with the Chesterton crowd. They will smoke cigars, quote pithy from GK, and meet at pubs to discuss intellectual topics (while smoking more cigars). “In Catholicism, the pint, the pipe and the cross can all fit..." they will add, as a smoke ring rises to the rafters.

I'm not sure if these Chestertonians ever discuss how on earth GK's distributism theory would work. Do you force people to give up their land for the sake of re-distributism? It sounds more Leninist than Levitical. Or what about this issue of "anti-semitism"? And is there, if we're being perfectly honest, an appetite for GK to be named a saint because he loved to indulge in the finer pleasures of life? Food, cigars, ale... he's not exactly a proto-typical desert father, but possibly a dessert father. One we certainly can cling to and, dare we hope, even mirror our lives on. Smoke and mirrors indeed.

Needless to say, the Chesterton crowd had, and has, no appeal for me.

Oh, but I have nothing against GK Chesterton. Though not a fan of his novels, I can appreciate his witty style. The more I get to know him, possibly the more I will like him. A saint though? God only knows. But it seems his cause is going up in smoke.

Now, can we move on to more important issues? Like Tolkein, for instance...